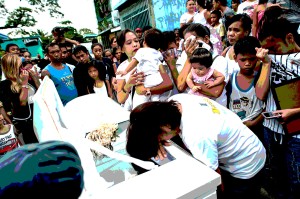 They do not have to be innocent; they must be defiled with criminal stigma to deserve punishment. After all, Jesus himself was not an innocent victim as traditionally assumed. Otherwise, the crowd will not unanimously participate on his death if he was declared guiltless. His putative pretension to be the king of the Jews was the crime that had persuaded the mob to participate on his lynching. An innocent sacrifice will cause repulsion, which will jeopardize the position of those in power through a sudden gush of revolt. The case of Kian Delos Santos is a case in point. It is necessary for surrogate victims to be demonized, to be branded either as criminal or monster. There goes the argument that drug addiction and criminality are one and the same.