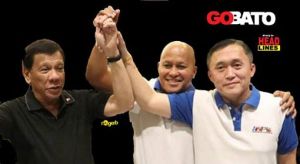 The swarming of clowns and charlatans in politics is quite alarming. More alarming is the fact that they are winning, and many of them have already turned the government into circus more than a decade ago. Luckily, such phenomenon is not unique in this country. Meaning, ours is not the only house that is being pulled down gradually by termites.

Yanis Varoufakis, in his talk in Cambridge Forum, asks the same perplexing question by saying, “Have you noticed how in the last few decades the quality of our politicians has stumbled?” He must have Donald Trump in his mind as the paragon of these politicians, but immediately he claims that this is a universal phenomenon. I couldn’t agree more with Varoufakis observation. As i am trying to look back to the time when Bong Revilla and Jinggoy Estrada stepped in to the Senate, I know exactly what Varoufakis meant by the “degrading quality” of our politicians. When Manny Pacquiao comes to the scene, that reached the level of concern that our politics is at the bottom of redemption.

In case a nefarious omen will make the group of Ronald “Bato” dela Rosa, Gadon, and Bong Go join the circus this year, plus the other clowns in the government senatorial line up, it will be the best time for us to wish together with father Juaquin Bernas that a time bomb should be dropped in our head to save us from more tragedy and shame.

Unfortunately, the prospect of having these people get elected this May election is actually not far from happening. I might be accused of spitting doom but the presence of Revilla, Estrada, Ejercito, Villar, Paquaio, and the bunch of morons in Philippine Congress, sets a precedence that it is very unlikely to be interrupted anytime in the future.

In the talk of Yanis Varoufakis, he said that not only the quality of our politicians is diminishing, their power in the same way. Our politicians nowadays are stripped off of power. They are reduced to clowns working in service of those who really hold the power. In an abridged lecture on history, Varoufakis tells his audience how power shifted from the monarchs to the merchants, from politicians to financial institutions, corporations and bankers. Wendy Brown, a political thinker, makes this her intellectual advocacy to disclose how democracy is gradually crippling by the process of marketization and financialization. If still in doubt with what the market can do, see the current facetious questioning of Alexandria Ocasio-Cortez on the House Oversight Committee of the United State Congress over the alleged manipulation being done by financial institutions, bankers and corporations on American politicians, and thereafter to lobby later for their financial and market interests.

Rumour has it that corporations, financial institutions, bankers, and business people are fielding and investing on politicians. President Duterte and those who ran against him in one way or another were supported by these elites and economic tycoons. Politics then is nothing but a proxy war of these rich people fighting over the control of our industry such as mining, fishing, banking, export, and other sources of lucrative income. They are the ones who really brought to power these politicians, and their interests therefore must prevail over the people’s. The case of Lumads being evicted from their ancestral land to transfer it over to mining tycoons for income production is an agonizing example of this political trade off.

With this kind of game, we don’t need principled and intellectual people in politics. All you need are those popular but unscrupulous. Those who will surely win like celebrities and movie actors but dumb and hungry enough to subvert morality and serve the business interests of his/her patrons.

Manny Pacquiao might be an exception as he is rich like most of the elites of our society. Despite of this, he remains a bastard within the economic arena with no strong root either in business or in financial tradition of this land. That is aside from the fact that he remains uneducated that could not stand at par with the crazy rich Filipinos. His future investments still in precarious condition that might be snared later by super rich people who have the instinct of natural predators driven by personal interest nurtured by neo-liberal ideology.

The like of the Villars are the most canny economic tycoons of this country. And they are considered as distinct species for refusing to stay away from dirty politics and use dummies instead. They opted to invade politics too to establish themselves well and secure more income. They know that the trouble of rich people maintaining a pigsty of dirty politician is that these politicians are always for sale that they can change patrons who can feed them better and abandon you in an instant. The Villars are the shrewdest, along with those that might have been with them in the same boat, for personally invading both the market and the politics.

So if Ronald “Bato” dela Rosa ang Bong Go win this election, it was because those in power willed it!