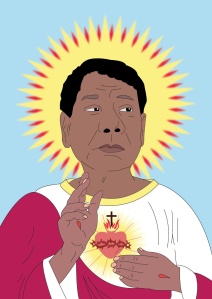 Ulrich Beck has a very interesting and fascinating analysis on the interactions of religion and the state. As states started to embrace secularism, either for the purpose of aggressively discrediting religions (Habermas) or to clad rather the state with a mantle of neutrality to distance itself from religions (Taylor), religions on their part welcomed this move of separation of two powerful institutions. Beck argues that religions take the rift as way to free themselves from the cumbersome of political governance and the rigors of responding to scientific inquiries. The state now will take care of those concerns while religions withdraw to the cloisters of spirituality, which simply means, their cultic rituals and practices.

Religion indirectly helped in broadening the supposedly thin line that separates it from the state. It shrinks back to its own seclusion and dare not to meddle with the affairs of the state, provided the state in return will do the same none-touch policy with regard to the affairs of the church. So when this government started to sleuth every corner to look for suspected small-time drug users and pushers and eventually killed more than 20 thousand of them in the process, the church barely squeak to protest it. When the expectation of workers to end the burden of contractualization was bungled, the church did not see it as spiritual issue. When TRAIN law was finally implemented to add more burden to already suffering poor, the church is not covered by it. When “tambays” were ordered to be nabbed and shoved down in jail that cost one innocent life, still no reason for the church to raise its voice. Those are not religious concern!

Calling God stupid is another matter! That is religious, that is spiritual, and that is against the sacred. The state has crossed the line, it has encroached into religious fiefdom. They are now rising up, both the clergymen and the faithful are calling out the state. They are now up to protect, to defend, and to fight for their weak and stupid god!