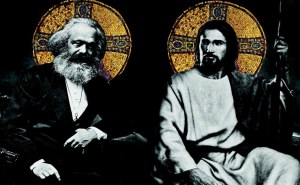 I am no expert of other religions, so I am not in a position to speak on their behalf. It happens they bear the same malady I am about to spit, then let my words waft over their sacred spaces. I am quite sure of one thing, however, Christianity is an alienating force that separates us from what supposedly are integral parts of us. The body will go ruin and will be replaced by a glorious one, we will leave for a perfect world while watching this world go down decay, and our true family are those who will go with us in blessed eternity, just to mention three of the plethora of such absurdity.

Karl Marx’s opinion is malicious, but not actually wrong. The best counter solution to this alienating force is to shut off any grounding of being outside of the perceived universe. That makes Marx a materialist: a man of science who believed in what is verifiable, measurable, and quantifiable. Marx might be an exceptional man, but he was not Superman who came from another planet, and hence, no previous connection with the affairs of this world. He was standing in the shoulders of many thinkers before of him, and first of them is Georg Wilhelm Friedrich Hegel. He shared Hegel’s conflict theory and as expected, his utopian view of history. Hegel assumes conflict is innate in thinking, and this tension between thesis and anti-thesis will bring us to a more progressive concept, which again will be subjected to the same process until we finally come to the truth. This progressive feature of dialectic process amused Marx, co-opted it and used it in his project of class conflict. Capitalism will reach its critical stage, proletariat will mature and unite against their oppressors, which will eventually usher to a great revolution where it will lead in the establishment of communism.

While Hegel went justified by the world producing great and avant-garde ideas, communism on the other hand remains an expectation. Capitalism keeps on advancing, while the proletariat are divided between those who desperately accepted their role as “modern slaves” and those who opted to keep the fight but constrained within the “economic” agenda and devoid of the larger political outlook. How did Marx get it wrong? Marx mistook material existence as same with ideas! Conflicts among ideas could result into sophisticated ones, but not so with class struggle. Idea is fluid, it can easily flow. It could encounter minimum restriction at times: censored by universities or by religions, but good ideas like water will find their way out to disseminate themselves in the end. Our intellectual market attest to the proliferation of ideas previously suppressed but able to find their way out in the public. The conflict theory of thesis, anti-thesis and synthesis is all a mind game.

Not so with materialism. To abolish private property, to transfer to the proletariats the means of production, to seize power, and to install the revolutionary dictatorship of the proletariats are all matters that seek to occupy actual space. First and foremost, the proletariat (peasants too) is not as solid and monolithic anti-thesis pitted against the ruling class. What unite them is their shared misery as non-propertied and exploited class. Once this shared identity dissipates, solidarity staggers as well. What Marxism failed to account is human nature which has started to dawn in the reflection of Antonio Gramci, and eventually pick up by subsequent generation of left-leaning psychoanalyst thinkers.

Jewish’s tradition on the struggle for human emancipation is far advance than Marx. While Marx was beginning to garner confidence to proletariat as emancipatory class in 1840s, majority of Jewish people had already lost their confidence to any human agents to lead the oppress and exploited out of their miseries. The significant shift began in 300 BCE when the hopeful restoration of the returnees from the exile turned into a bitter cycle of abuses and exploitation. Upon the return, the shared experience of exile, slavery, and oppression vanished and the community suddenly turned diametrically divide between oppressors and oppressed. The long history of frustration took a toll when the Hasmonean Dynasty, heirs of the heroes of the Maccabean revolt, usurped both the power of the state and of the temple and ruled as despotic king/high priest over the subjugated people. The hope for humans, individuals or groups, to lead social reform has decline, if not totally died down.
Nonetheless, hope itself remains. Apocalyptic materials flooded during this period. Their anonymity portends seditious campaign. Their trust in God, or his divine agent, who will break in the history to implement justice is an indictment of humans and of human institutions. Apocalyptic movements, by nature, were separatist which distanced themselves from the center of power, both political and religious. No humans, not even peasants or proletariat, but God or the Son of Man himself will come down from the clouds to punish the oppressors and to vindicate the oppressed and the exploited people. Trust in human capacity to slither themselves out from the shackle of oppression has come to its zenith of frustration, apocalyptic eschatology has to summon God or his divine agent to bring out social change.

Unfortunately, Communism has not come yet, and so as the parousia. Whether the delay of the parousia is a modern frustration erroneously transposed in the apostolic age, it remains a frustration that must be reckoned by modern people. The delay which might also be a factor that had compelled Karl Marx to restore confidence in human capacity to ignite and implement social change. Sad to say, both hopes must be questioned now in terms of their delay. The long delay of both the descend of the Son of Man of the Book of Daniel, of the Gospel of Matthew, and of the Parable of Enoch, and the Marxist’s seize of power of the proletariat prompt us to re-imagine our principles and ways of struggle.

There is another man as formidable as Marx who lived hundreds of years before him. Unlike Marx, this man evolved from a mere proletariat from Galilee into a messiah. What I can vouch confidently, however, Jesus was born in messianic age where the hope for the messiah was shared by many apocalyptic movements. Was Jesus an apocalyptic prophet? Most likely yes, but not probably exactly the one portrayed by the gospel writers who had written during the height of Jewish War and in the formative stage of Judaism after 70 CE. Was Jesus a believer of class conflict? Most likely yes as he was keen and defiant of the ruling class and defending the social outcasts, but not probably a protagonist of bloody revolution that will topple the bourgeoisie. He believes that there will be an eschatological reckoning at the end of history where the poor and the outcasts will be vindicated, and the arrogant and the powerful will finally punished in eternal fire. But he is more concern on the present reign of the Kingdom of God where the ethical demand of the Torah is being exercised and practiced. Seeing it this way, the eschaton was not delayed, it was rather suppressed by people who replaced the vital parts of the Torah with ritual purity and the “teaching of the elders”.

Jesus believes at the same time in revolution, but not a bloody one. As a citizen of a nation that almost has no experience of peace, Jesus knew for sure that blood begets blood. He did not agitate the peasants and the proletariat by making issue of their shared misery, their exploitation and their oppression. Those are artificial binding forces that sense of solidarity would evaporate easily once a person gained economic security. He rather focused on universal precariousness which both the rich and the poor are susceptible to. The motif of death in the gospels was utilized to show that people are forever precarious. And the baby Jesus shows that even the son of God would barely survive life without the matrix of human assistance supporting and nourishing him.

Oppression and exploitation are the experience shared by the poor and the outcasts, vulnerability and precariousness on the other hand are universal; shared by everyone, poor and rich. The command to love one another assumes this, for one will forever precarious and subject to pain, natural or (wo)man made. One is both a receiver and a giver of love regardless of his status in life. This is the revolution the Gospel of Luke anticipates, where the great reversal is expected. A dream society where the spirit of poverty will prevail against the love of the self that secures for oneself the surplus economy. Where mourning with the pain of the “other” is being practiced than promoting the individualist mantra – “personal end is supreme”. Where the pure in heart is measured not based on her allegiance to dogmas and ritual purity, but in creating a network of support in order for life to flourish. Such move might begin like a mustard seed, but it might grow to become the social normal when enough dedication and effort are put in it.

Unfortunately, such picture of society has not also occurred, and none seemingly is anticipating it to come. Our society for long is programmed in two extreme options: God will violently enter history to save us from our oppressors, or the exploited class will rise in revolt and violently seize power and smash the state. In a televised public political forum, after an enfeebling discussion on Philippine social problems, Father Joaquin Bernas was asked about what he thinks is the best thing for Filipinos to do to get out of the seeming impasse. After pausing for seconds, the Jesuit sighed briefly and facetiously said, “We need an atomic bomb dropped in our midst and destroy everything so that we can start all over again.” I fully understand the frustration, I wish to understand too the necessary violence.