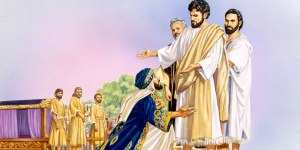 Jesus is totally annoying at times.  He would suddenly burst on things out that would completely addle one’s mind.   No wonder that the Jesus of faith is gaining more popularity than the one who actually walked our planet.  Among his peeving gibberish is the demand to sell out one’s possessions and give to the poor.  What the hell was that?  It only confirms the rumor that he was miserably broken, not even owning a pillow to lay down his tousled head, thus having found the temerity to call for such renunciation. It looks more like a classic resentment of a poor man’s misery over the fruits of the hard works of wealthy people.

Having found in the Canon, however, preachers find solace in using this obscure saying in few occasions to spur people to give generously in fund raising events.  Other than that, the saying is completely useless.  Why such a hero, a rabbi, a sage, and the now revered incarnated divine word would utter such non-sense? Not only it was hard to fathom, it has no place in the real world!  It is worth revisiting therefore the few occasions where in Jesus lambasted someone with such absurd demand.  It might point us back to the origin of our faith; to the question of the stability of the mind of the hero we now worship as Lord.

There are four major occasions where in Jesus uttered such demand.  Three of them deal with one and the same story recorded by three evangelists with minimal discrepancies as always the case in the synoptic.  What is usually ignored every time the narrative was mentioned was the question raised by the intruder that prompted the utterance of the saying as Jesus’ response .  The demand then to sell all possession and give to the poor is a response to the query, “what must I do to inherit eternal life?” It is worth emphasizing here that Jesus was not providing them with fundraising technique, or any other religious activity in which the demand,sell your possessions, was mitigated and domesticated into.   That however makes the saying baffling and confusing by depriving it with sensible meaning.  In what way, therefore, throwing out your possession to the poor would have to do with gaining eternal life?

Jesus’ attitude towards wealth and treasure is a little puzzling.  His disturbing parable of the Rich Fool confuses most of serious bible students as to what has triggered the wrath of God to threaten the man with death.  Jesus is seemingly suspicious and inimical with wealth.   “Watch out against any form of greed.  A man’s life does not consist in the abundance of his possessions,” he warned his audience before giving the Parable of the Rich Fool.  God burst out in anger upon hearing the man’s feeling of satisfaction on the sight of abundant produce of his field, his intention to keep them all to himself, and to live a worry-less life thereafter.  God could not stay in silence; he could not bear the scene, and could not tolerate a hateful self that is completely preoccupied with its own pleasure and happiness. Death is a reminder that however we try to secure life it remains precarious.  And God threatens to bring it to the man to curtail the life he purposely secured and taunting him afterwards by asking him, “Then who will get what you have prepared for yourself?”  In the midst of so much hunger and poverty, to live an opulent life is to live a detestable life, a hateful life of selfishness and greed that refuses to share and to give in order for him to accelerate his gain and hence, accumulate more.  It is a self-enclosed rottenness that is in need of salvation; of a way out from this entrapment in which Emmanuel Levinas described as the “horror of too-much-of-the-self”.

The real battle in terms of our relation with the “other” is not so much with what we should not do than what we should do.  In final analysis, adhering on the command not to kill is actually doing good thing to yourself than doing more to other by saving yourself from the intricacy of murder.  Not doing anything harmful against anyone I may say is an easy task by simply maintaining certain distance from people, but to subscribe on the command to do good things to other would require you to transcend that distance and pull down walls to see the other in his suffering. Jesus deals with what seemingly the obvious sin of the man of who asked him about gaining eternal life – refusing to do what he should have done.  For it is impossible for any man to amass great if he has only done what he should have done – sharing his wealth with the suffering “other”.  For a man to gain abundant richness in the midst of so much view of misery and poverty is to neglect them, and build instead bigger barns to keep everything from the reach of these people.  The poor and the hungry that surround a super rich person is a grave indictment to his hateful and greedy self that qualifies him to share the fateful end of the Rich Man that ignored the sick Lazarus.  The super rich man who approached Jesus indeed was in need of a way out from his disgusting sovereign life.  A sinner’s prayer for sure would not mend such reeking odor of the horror of self-directed ego.

Have you ever wondered why Lazarus was put at the gate of the rich man?  It is because the presence of suffering Lazarus was both an indictment and a way of salvation to the greedy self.  The image of a sick and suffering Lazarus was imposing; it was intentionally put at the gate to make the rich man no excuse and make him guilty therefore of not doing good thing to succor his neighbor.  In the same way the presence of a suffering person is offering the rich man an open door for escape; an escape from the tightly-closed life of individualism and greed.  Emmanuel Levinas commented on this imposing figure of a suffering face before us saying, “Thus in expression the being that imposes itself does not limit but promotes my freedom, by arousing my goodness.” Every needy person before us was strategically put there in order not to limit our freedom, but rather to promote our freedom by giving us the chance to be good and do good things to others.  The “suffering other” is an open door to escape the rotten and reeking life of greediness.  It is a way to salvation, to liberation, to freedom.  Take notice of the response of Jesus in the Matthean version of the story of the eternal life-seeker-rich guy: Jesus said to the man who asked for eternal life, “to enter life you must keep the commandments”.  By becoming super rich, Jesus saw what the guy was basically missing was not eternal life, but life as it is.

A life of selfishness, a life of too-much-of-the-self, of greed and hateful sovereignty, is a life of horror and hell infused with God’s indictment and reek with the divine threat of death. The needy, the suffering, the downhearted, the poor and the sick are the widely open door offered as way to escape this hell.  “sell your possessions and give to the poor”is not about fundraising, it is a way out of perdition in order to gain and enjoy life!  Jesus, indeed, makes sense!